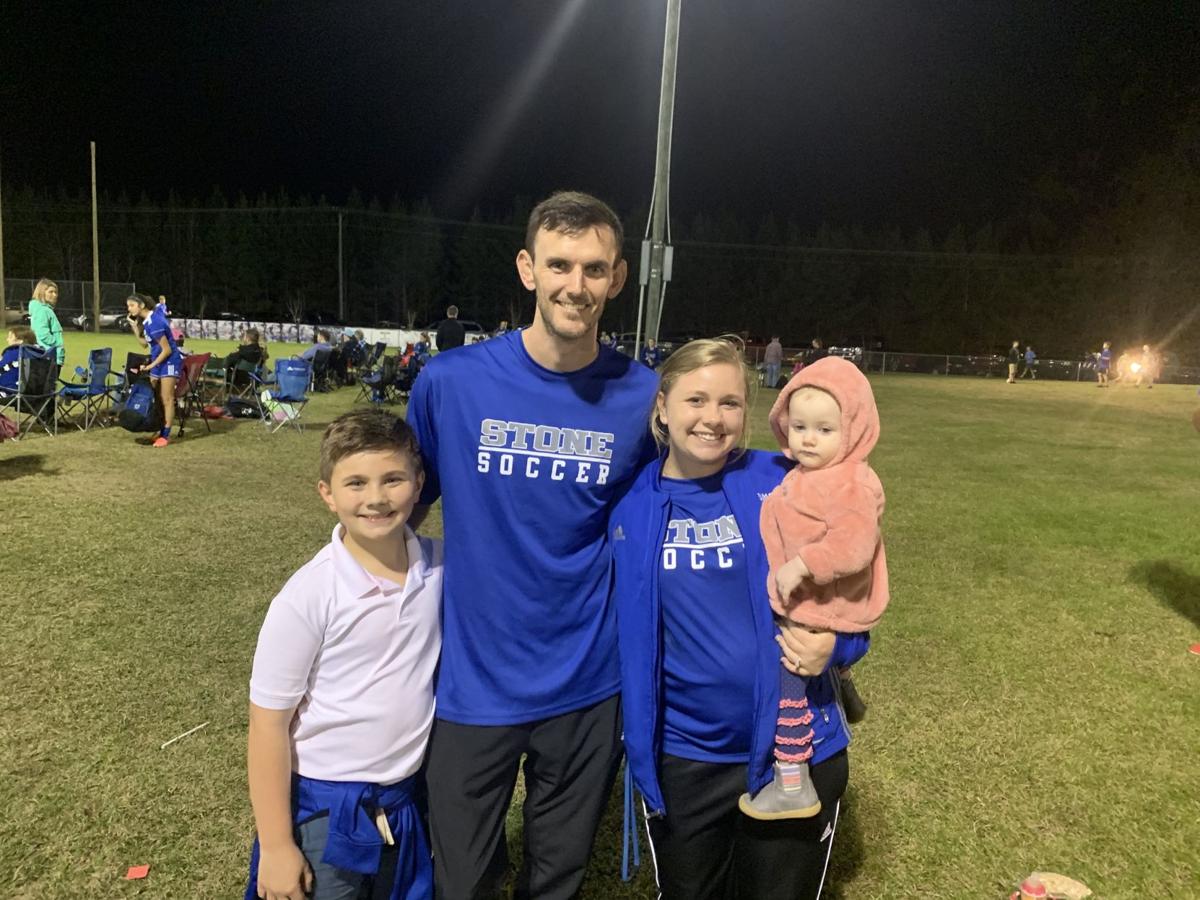 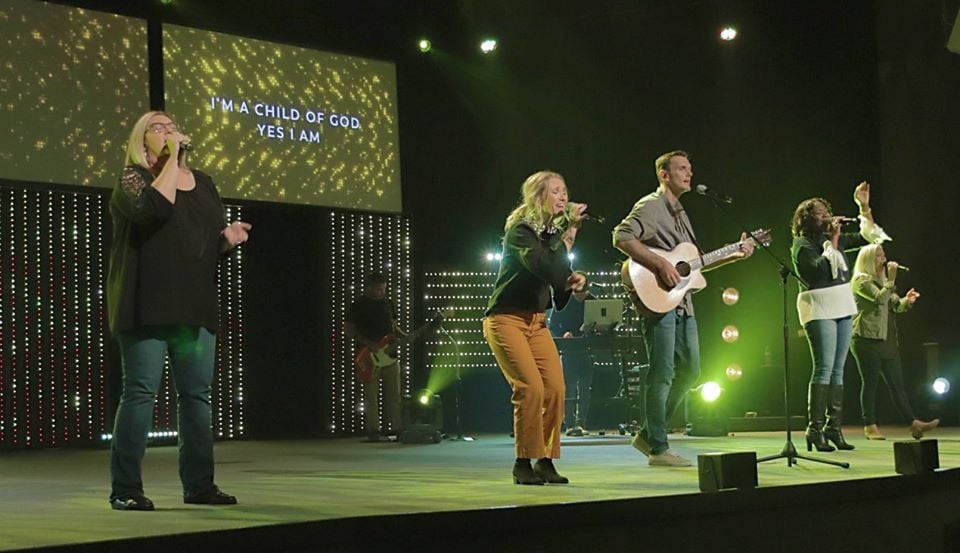 Pat Harrison [center with guitar] leads the worship team at Northwood Church in Wiggins while Carissa Harrison serves in the nursery. 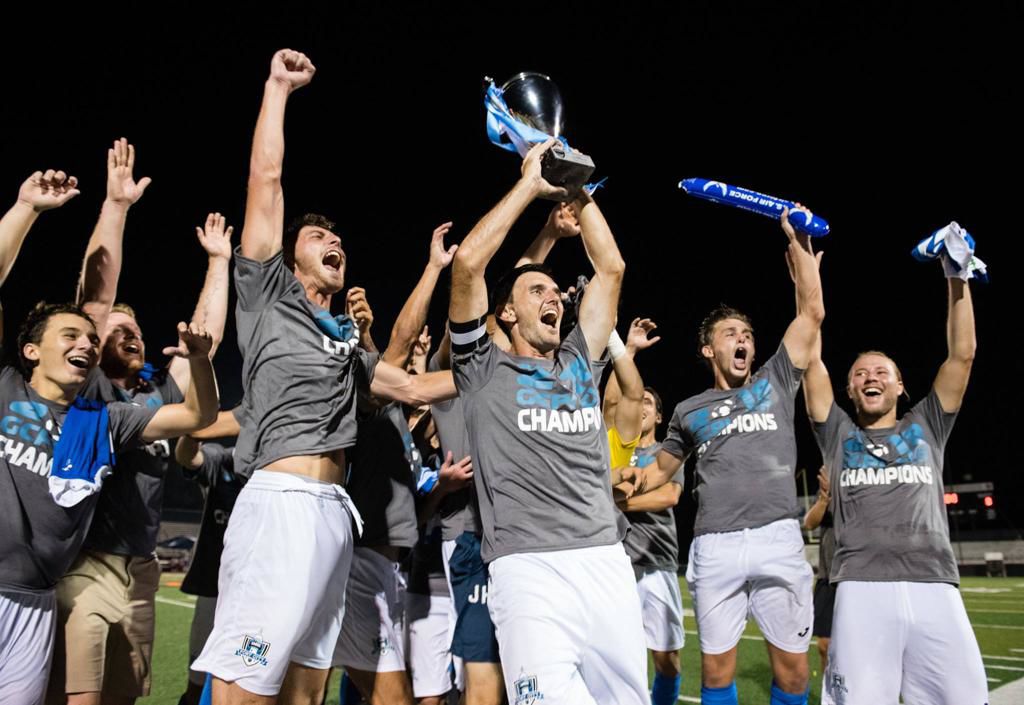 In addition to coaching high school, Pat Harrison [center with trophy] is the club captain for Port City FC, a semi-professional soccer team on the Gulf Coast. In 2018 the team won the Gulf Coast Premier League trophy.

Pat Harrison [center with guitar] leads the worship team at Northwood Church in Wiggins while Carissa Harrison serves in the nursery.

In addition to coaching high school, Pat Harrison [center with trophy] is the club captain for Port City FC, a semi-professional soccer team on the Gulf Coast. In 2018 the team won the Gulf Coast Premier League trophy.

Any given game night, Stone High School soccer coach Pat Harrison and his team watch the girls’ game first. His 17-month-old daughter is in his arms as he watches the patterned ball move up and down the field.

Across the field, his wife, Carissa Harrison is coaching her team. She can faintly be heard giving praise and instruction from where he stands.

As the first game winds down, the boys begin to warm up. Close to 7 p.m., Pat and Carissa trade places minutes before the boys’ game begins.

The Harrisons are not only coaches, they are spouses, parents and teachers. They are raising two children; their daughter Kinsley and Carissa’s 9-year-old nephew, Carson Miller.

“But we always wanted to be coaches together,” she said.

The couple met in 2013 on a soccer field in Hurley, which is Carissa’s hometown. The two would play soccer with friends on Tuesday and Thursday nights and they’ve been together ever since.

They both played soccer in high school and college. Carissa played one semester at Jones County Junior College, now known as Jones College. Pat played at Mississippi Gulf Coast Community College where he later was on staff himself.

It is rare for two coaches in any sport to be spouses. It is even more rare to have spouses as girls’ and boys’ team head coaches. The Harrisons are the first in Stone County.

Together they are finishing up the regular season with some record-setting victories under their belts and looking forward to potentially making the playoffs.

Victories have not been won without hours of practice and hard work. But the Harrisons understand the importance of teamwork on an entirely deeper level.

So when they found out their dream of coaching would be real this season, they put their heads together and made it work.

“It was hard to prepare because we didn’t know what to expect,” Pat said.

For Carissa, who started back coaching the middle school girls’ team 10 weeks after having Kinsley, she knew what they needed.

They put together a master list of reliable babysitters and friends and she had the school transportation service add a seatbelt to the bus so Kinsley could legally ride with them to away games.

When the weather is too cold or too bad, Kinsley stays with the babysitter, but she is able to travel for most games. On the sidelines, parents are always available to help out when they are needed.

“Parents help us out lot,” Carissa said. “Carson hangs out with the boys (on the team) and they help out with him.”

Likewise, it is not unusual for Carissa’a players to carry Kinsley on their hip near her.

"She’s the baby of everybody,” Carissa said with a laugh.

Since Kinsley spent some of her first weeks on a soccer field, she does very well with being on the sidelines no matter which parent is coaching.

For Pat, who came to Stone County after being with Mississippi Gulf Coast Community College, he knows that this would not be possible if he had stayed in the college coaching world.

“We love Wiggins and that’s kind of what helped us make the decision to stay and coach here,” he said.

He said the group of 14-18 year-olds he has coached have responded well to his level of instruction.

“I’ve definitely thrown a lot at them and they’ve picked it up,” he said.

The offseason is usually calmer, which will provide some breathing room for the family.

They are both continuing their education at William Carey University on top of teaching in the Stone County School District. Carissa is getting her master’s degree in education and Pat is finishing a bachelor’s degree for teaching.

They rely on crockpot and made-ahead meals to help the week go smoother.

On their days off, they catch up on laundry and other household chores, or go to the park. Sundays are for church. They attend Northwood Church in Wiggins where Pat leads worship and Carissa volunteers in the nursery.

Pat and Carissa are both passionate about being involved and about their jobs. What makes it work is the love they have for each other and their passion for coaching.

"It’s crazy, but we have fun,” Carissa said.