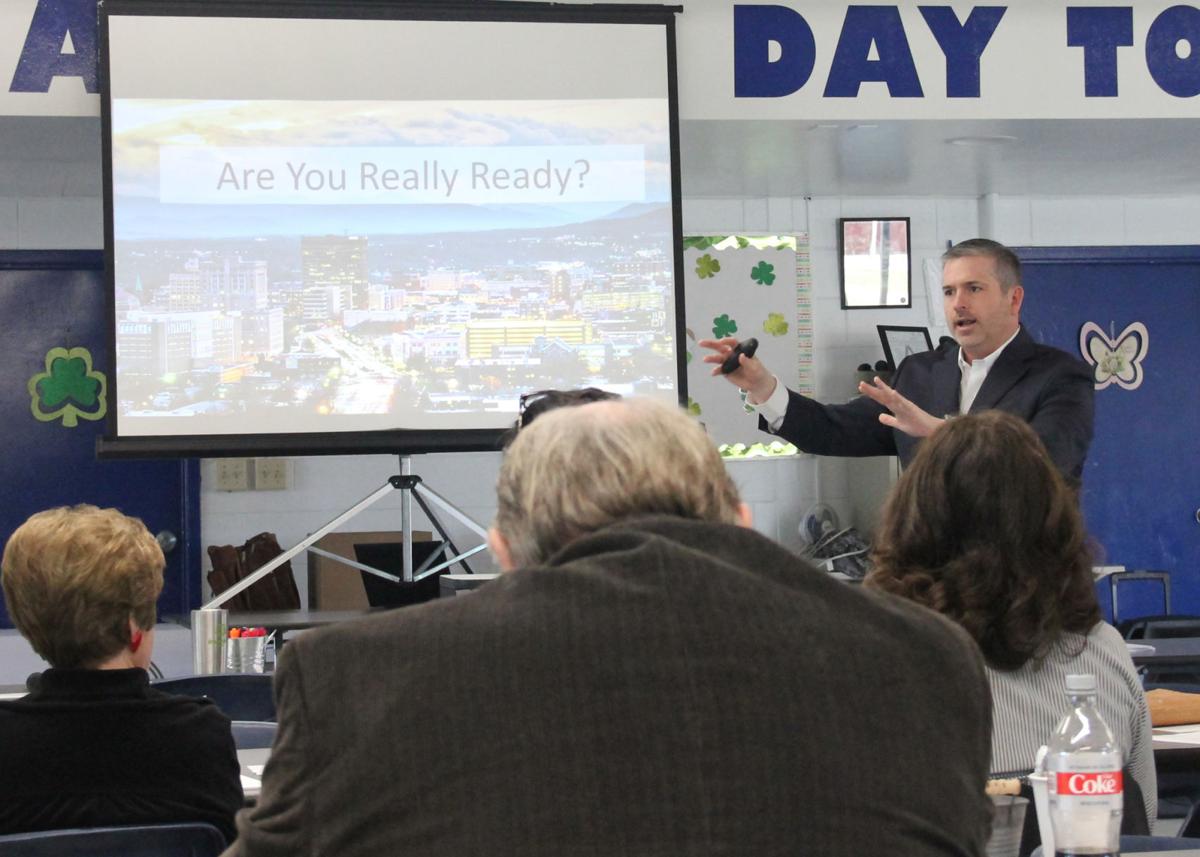 Ben Teague, head of economic development at The Bread Agency, during one of his presentations at Saturday's leadership summit. 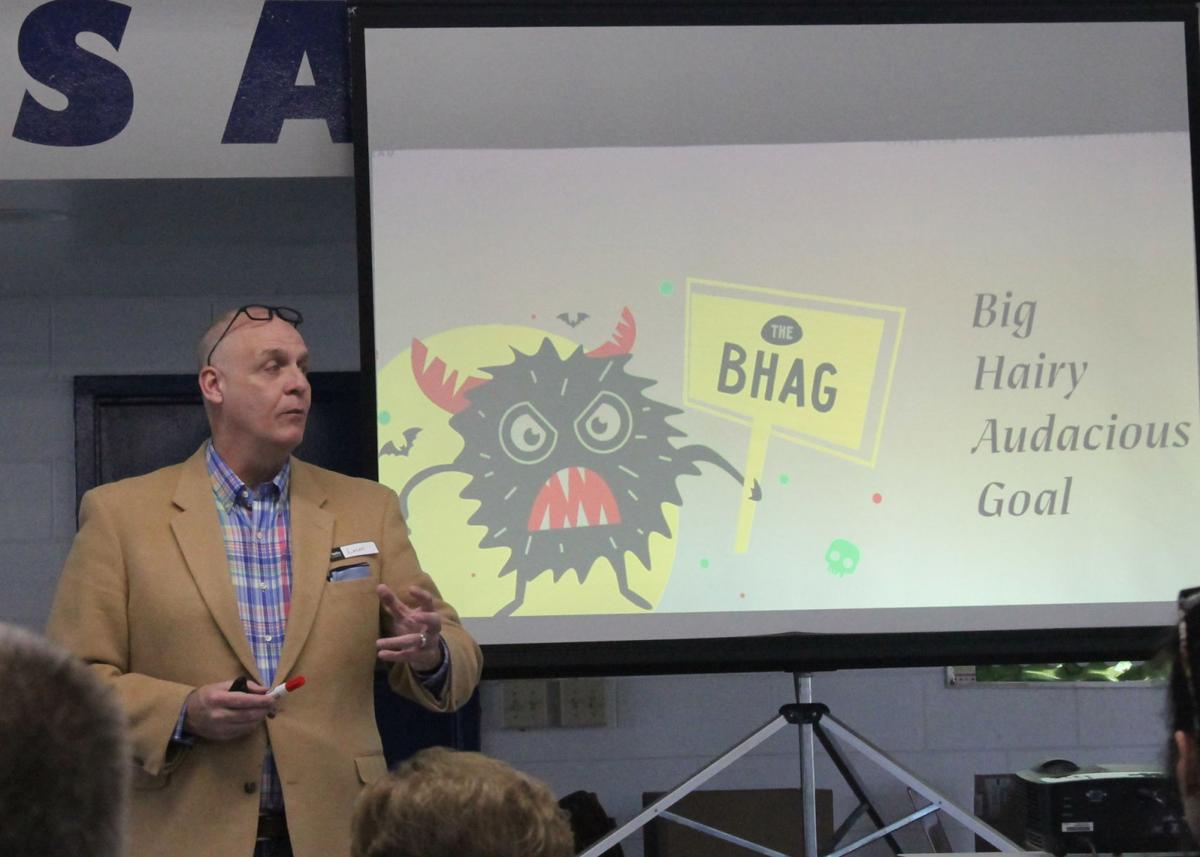 Ben Teague, head of economic development at The Bread Agency, during one of his presentations at Saturday's leadership summit.

A new day may very well be dawning for the Stone County Economic Development Partnership.

And perhaps by association, the entire county.

Approximately 40 community leaders met Saturday in the Stone High School cafeteria for a leadership summit hosted by the EDP and The Bread Agency, a Hattiesburg-based consulting firm hired nearly six months ago to conduct a study on economic development in the county.

Those gathered heard the results of that study as well as worked on ways to improve not just economic development, but community relations and goals for the future of the county.

One of the first findings presented was that the county is divided because leaders do not trust one another and appear to be more concerned with individual priorities rather than collaboration.

At the same time, according to a printed report distributed to attendees “...there is a concern that the EDP does not have the capacity to achieve its objectives in relation to economic development.”

The report also said, “The lack of confidence has resulted in many community leaders simply giving up on Stone County EDP, but not necessarily the importance of economic development.”

And yet, the authors of the report were encouraged by the willingness of the community leaders to sit down and attempt to arrive at solutions to those problems.

“We believe that healthy communities are first and foremost unified communities. Over the past six months, leaders and business owners across Stone County have come to the table to focus on collaborative solutions to move the City of Wiggins and Stone County forward,” said L. Lavon Gray, Senior Director of Culture Development for The Bread Agency. “I’ve been encouraged by their willingness to have open and transparent conversations about important challenges facing the community in the area of economic development. This leadership summit is the first step, and an excellent example, of that effort.

“Because of this, we believe there are great days ahead for Stone County.”

A perfect example of the collaboration arose during the summit.

Stone County School District Superintendent Inita Owen was explaining an effort to secure $8 million through the Gulf Coast Restoration Fund, a part of the BP settlement from the Deepwater Horizon catastrophe.

The money would be used to construct a Career and Technical Education building.

Owen said she and others had been to Jackson and were going back this week to lobby state legislators and could use any support the county or city may be able to provide.

With a little coaching by Gray from the sidelines, Stone County Board of Supervisors President and District 3 Supervisor Lance Pearson said his board would pass a resolution in support of the district’s efforts and he would join those headed to Jackson today.

City of Wiggins Mayor Joel Miles, while not wanting to speak for the city’s Board of Aldermen, said he believed the board would also pass a supporting resolution and he would join the coalition going to Jackson.

All of which left Owen incredulous on Monday.

“When I came to this job five years ago, this kind of mutual support by the various entities would never have happened,” she said.

Grace Kent Johnson, co-founder and owner of The Bread Agency, said that type of unified vision was necessary and attainable by communities willing to work toward it.

“Unity isn’t easy to build. However, we’ve seen the beauty of watching brands rise to unity within businesses or communities in conflict,” she said. “It’s remarkable to see lives changed through unifying teams and to watch them work together to build powerful ideas, strategies, goals, and visions for the future.”

Another finding was the fact that roles of community organizations are not clearly defined and, “... there is no collaborative economic development strategy that has been embraced by all entities within the county,” and, ... the community has no understanding of EDP goals or strategy.”

The same findings on roles pointed out that, “Day-to-day chamber responsibilities are perceived to undercut economic development priorities.”

Other shortcomings pointed out were a lack of communication, a lack of shared vision and a lack of collaborative problem solving.

While all of those shortcomings were pointed out, recommendations for solving them were also presented, and many in attendance began working on them nearly immediately.

The first was trust building.

The recommendation was that, “Each stakeholder should commit to and unapologetically hold each other accountable for these foundational characteristics.”

Where roles are concerned, the recommendation was that, “Chamber of Commerce responsibilities be separated from the EDP by June 2.”

Regarding communication, the recommendation was, “Supervisors, Aldermen and school Board monthly meetings include a brief EDP update given by their respective EDP accountability team member.”

There were three recommendations in the area of vision.

1. “EDP work with Bread Agency to develop a strategic plan with measurables that include 10-, five- and one-year goals to be reported back on June 2.”

2. “EDP immediately revise the monthly-meeting agenda to facilitate a shift from reporting to execution of economic development priorities.”

3. “EDP explore the feasibility of aligning with a regional coalition to be reported back on June 2.”

The final recommendation was that the EDP identify a Chamber Coordinator [volunteer or part-time] to allow Executive Director to focus exclusively on economic development priorities.

Early in the presentation, Gray had asked those in attendance to identify what he termed a BHAG, a big, hairy, audacious goal. Something attainable in 10 years.

That goal would appear to be development of a 100-acre parcel for a turnkey-ready industrial park to attract additional industry to the county.

Gray explained that to get to that goal required intermittent goals be accomplished and attempted to identify those along with individuals willing to head up the effort to achieve them.

He described those intermittent goals as, “Strategy rocks,” upon which traction could be gained.

Those goals fall under the following headings.

Different attendees committed to developing plans to achieve those goals and are expected to report back at a follow-up summit in June.

District 5 Supervisor Nathan Bond was in attendance and was impressed with the willingness of participant to work together.

“I thought it was encouraging to see everybody come together to move the county forward,” he said.

Mayor Miles said he thought there were a lot of good ideas presented and arrived at during the summit.

“Hopefully, we’re all able to work together to move economic development forward in the county,” he said.

That cooperative effort will be necessary if the goals established before and during the summit are to be met.